The Rotary Club Jever-Jeverland invited us for a visit on 6th March 2020. Thomas Wolff reports:

Jever/ff- "The good is never lost" is how Katrin Rohde (71) describes the charity she founded 25 years ago in Burkina Faso on a former rubbish dump in the capital, Ouagadougou, "Association Managré Nooma pour la Protection des Orphélins “, AMPO for short. Katrin Rohde, previously owner of a bookshop in Plön, paid a return visit to Rotary Jever-Jeverland and reported to an audience in the Lokschuppen about the organisation known throughout West Africa as the "Kingdom of the poor" that started by setting up an orphanage for streetkids. As with the fist visit to Jever in July 2015, Katrin, known in the Third World as "Mama Tenga" (Mother Fatherland), kept the audience spell-bound with fascinating accounts of her life in Africa. The African mood and African vibes were set by the East Frisian choir "Taktwechsel", mirroring their performance at the charity concert held for AMPO in the church in Jever in September 2015, conducted by Harm-Dierk Wellhausen.
AMPO has been receiving support from the Jeverland Rotarians, the Dutch partner club Leeuwarden-Nijehove and the Rotary Club Wittmund-Esens since 2015. It started by collecting school satchels, providing sportswear and now they support a workshop that builds tricycle wheelchairs for people wit disabilities to enable them to lead independent lives. Rotary support for these projects was launched by Theda Janssen-Nickel (Jever-Jeverland) , who acted for many years as an expert for major organisations such as the United Nations in development aid in Burkina Faso. With the help of Rotary District 1850 more than €20,000 has been transferred to Ouagadougou. "This is help for self-help in one of the poorest countries in the world at its best", said Jever Rotary President Dr. Regina Fladung in her welcoming address, echoing the words of Theda Janssen-Nickel. "Thank you, Rotary" replied Katrin Rohde, stating that the mobile wheelchair project travelling outside the capital brings mobility to people with disabilities in remote villages. She also expressed her thanks for the €648 donated spontaneously by the guests that evening in the Lokschuppen who were enthralled by her passionate presentation.
With the money entrusted to the organisation Katrin Rohde and the AMPO team provide support not only for children and young people. She stresses the point that she expects the children to actively engage in the project and make an effort. "The older ones look after the younger ones and vice versa. Only those who perform well at school have their school fees paid."  That is why an essential part of the AMPO success story is the uncomplicated and unbureaucratic implicit cooperation of the children who benefit. For her it is also important that the successful projects are continued sustainably by Africans themselves. "After 25 years I'm proud to note that I no longer have a say.“ For in the meantime AMPO is managed locally by seven African Directors on the principle of "Africa for the Africans". 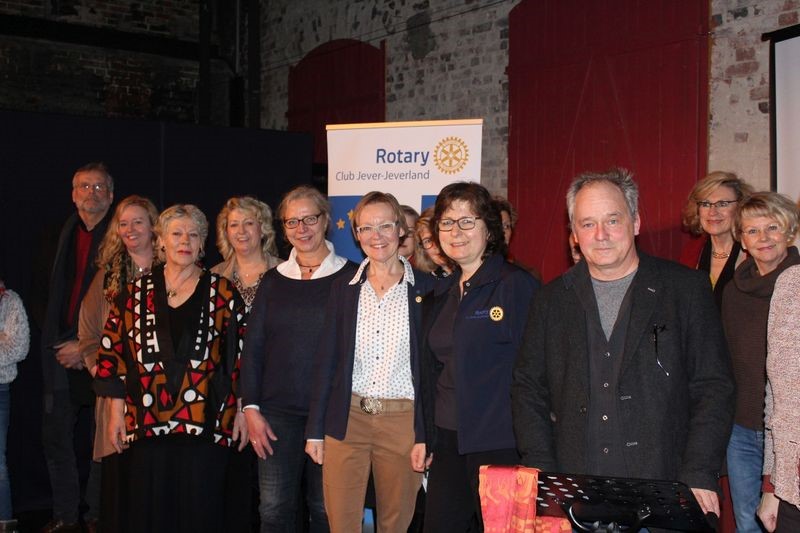