”My name is Michel, I’m married and have 4 children. I used to work as a bricklayer. One day I was working on the support structure of a two-storey building when one of the beams came into contact with a power cable. I got an electric shock and lost both arms. I spent 6 months in hospital, 2 of them in a coma. I’ve been living with this disability now for 5 years. I was abandoned by friends and acquaintances, but thank God I’m still alive. Over the past few years I have discovered skills I knew nothing about. I have developed my sixth sense. I can wash, eat, get dressed and undressed, use my cellphone, etc. on my own. I do my laundry and clean the house without help. I contacted AMPO some time ago to see if there was any possibility of receiving artificial limbs.

When I talked to Edouard, who is responsible for the AMPO projects for people with disabilities, he gave me some advice: it would be better for me to have the equivalent value of an artificial limb and use it to start an income-generating activity so that I would no longer be dependent on the generosity of other people. I realised that this was a good suggestion and I have been thinking about it. I would like to buy building material that I could then rent out. I’d like to have the following: shovels, hoes, wheelbarrows, hammers, chisels, crowbars, trowels, second-hand drills, planks, rafter beams and a shed. I am hoping you will be able to help me improve my circumstances  so that I can look after my children. Thank you in advance and God bless you“. 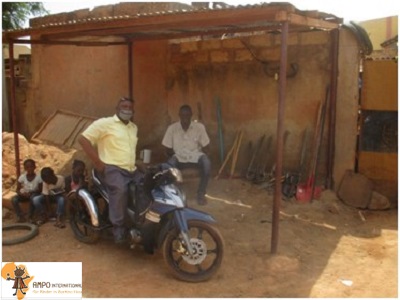 The cry for help from Michel Ziba was heard. Katrin Rohde provided the financial means for him to gain his independence. The shed was built and the material for rent was purchased. Edouard Ouédraogo visited Michel Ziba in his new shop in July. The newly fledged businessman can now look to the future with hope. 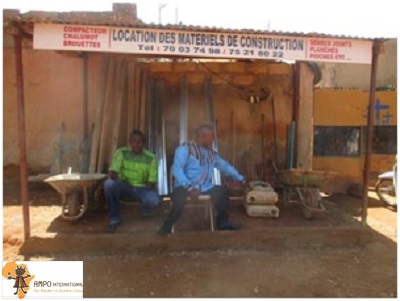 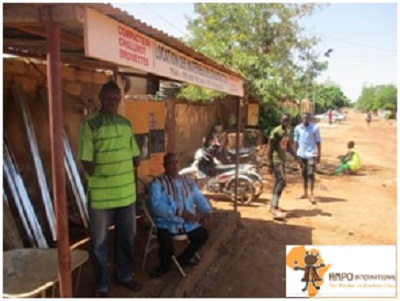 This is the account of a 56-year-old man who emigrated from Burkina Faso and was faced with having to cope with a 4-month-old baby. The reason for this was the premature death of his wife. This is his story: Ilboudou lived with his wife in Côte d’Ivoire, a neighbouring country of Burkina Faso. There were 4 children from this marriage. Sadly the marriage broke up and shortly afterwards Ilboudou lost his job. Under these circumstances he then decided to return to his home country (Burkina Faso) where he re-married. All was going well and the couple had a baby. However the situation changed following the birth of the child. Fate dealt another blow: his wife was taken to hospital because she was bedridden. It transpired that his wife was HIV-positive and that she had known of her condition long before her illness, but failed to tell her husband.

On account of the desperation and suffering of Ilboudou and in view of his attitude towards his wife, the doctors appealed to AMPO for help. The VIIMDE Project provided milk for the infant and ensured that medical care was available for his wife.

Sadly she died leaving behind the 4-month-old baby. Caught between grief and perplexity as to his late wife’s behaviour, the father was faced with an emergency of caring for the child. The baby was entrusted to a sister of Ilboudou and the VIIMDE Project has taken charge of providing milk and medical care for the infant every month.

Once in desperate need in coping with the difficulties of caring for the child, Ilboudou is grateful to the AMPO VIIMDE Project. AMPO in turn is grateful to the Luxemburg foundation Stiftung Dr. Elvire Engel (FDEE) for their tireless commitment to helping so many people, putting back a smile on their faces and giving them hope for a better tomorrow. 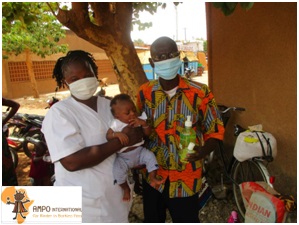 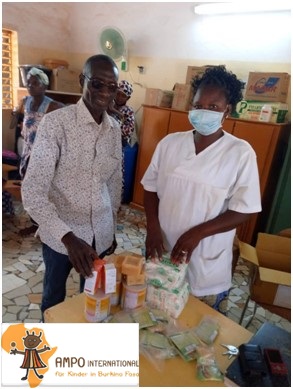 The admission of new children to the orphanages involves several steps. We reported that in June we conducted home visits, social surveys and pre-selection depending on means tests. Once the educators had concluded this stage, the psychologist enters the picture and an interview is held with the children and with the applicants.

A child with a psychological condition requiring care in a specialist institution, i.e. a medico-psychological and pedagogical structure would not be admitted.

These psychological interviews are also helpful in explaining or assessing the background motivation of parents submitting an application for their children.

If the results of the psychological interview of the child are conclusive, the child may be accepted into the extended AMPO family. 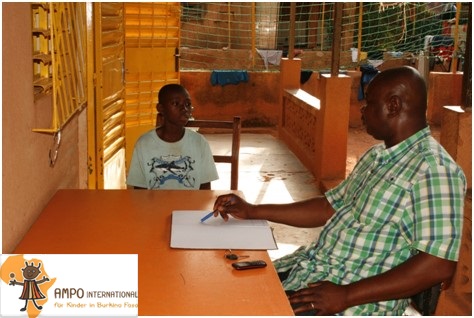